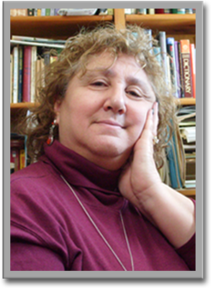 Deborah Bogosian is a freelancer, an author, a poet, and a teacher with permanent certifications in elementary, reading and special education.

Empathy is an important quality for a teacher. Understanding a student's problem is necessary in order for the teacher to help the student solve it. Experiencing and overcoming personal difficulties help to develop that empathy.

In the second grade, Deborah Bogosian began to experience fuzzy vision. Being very young, she did not complain. It did not hurt. She thought that everyone saw what she saw. This mistake was not corrected for two years. In the early 1950's the schools were not testing vision. But one day her father was watching as she squinted to see the music for her piano lesson.
a
Off to the eye doctor they went and she suddenly saw a crisp clear world but two years of damage had been done. At this time she was not doing well in school.
But she had a teacher for fourth grade whom she describes as having saved her. And ever after she wanted to teach.

She got married before finishing her Bachelor's degree and had her two children before finishing her Master's, both degrees earned at Herbert H. Lehman College in New York. Then she went further, taking the courses she needed to gain permanent teaching certification in reading and special education on top of her credentials in early childhood education.

Deborah spent many years in the public schools and private schools, finding herself to be a child's advocate. She later began a private tutorial service which she ran for 15 years.

Deborah Bogosian is a member of the Women's Writers and Artist Matrix (WWAM). Everyone has had a moment when they look back at some part of their lives and say, "I could write a book." But few people do. To her credit, she has written How To Survive Your Child's Educational Experience, That Sounds Like Fun, Sorrow Cave, Family Fun In The Kitchen and From Rhyme To Reason. There will be more from her in the future.